Jump to a specific year below:

The Britannia is one of the most recognisable coins in the world today, made in both gold and silver by the Royal Mint at their refinery in Llantrisant, South Wales where the Mint has been operating since the early 1970s.

Upon release the gold Britannia, like the older gold Sovereigns, was a 22-carat coin. This continued to be the case until 2013, when the Royal Mint changed their policy and increased the coin’s purity to 24-carats; a step up from the gold Krugerrand to rival productions by the US and Canadian Mints.

Silver experienced a similar change, forced by competition from foreign mints. Initially, silver Britannia coins were minted at 958 fineness but in 2013 these coins changed to become 999.0 fine silver. 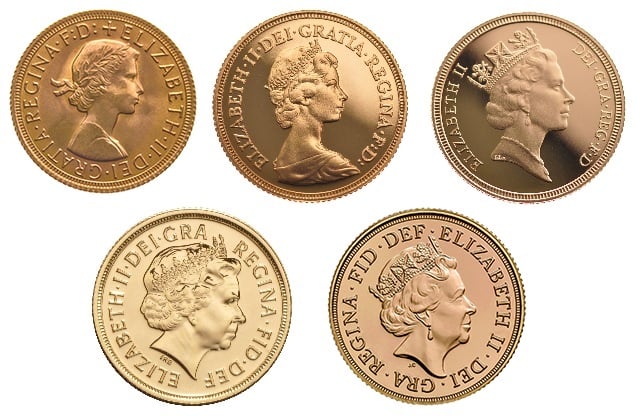 There have been five portraits of the Queen used on British coins since Queen Elizabeth II's coronation. The Young and Jubilee heads can be seen top left and top centre in the above image.

The first gold Britannias from 1987 to 1997 featured the third portrait of the Queen, as designed by Raphael Maklouf (top right).

Sculptor Ian Rank-Broadley won the Royal Mint’s contest to design the next portrait, and his designs were used from 1998 until 2015 (bottom left). Many commonwealth nations still use this portrait as the obverse for their coins today, most notably the Perth Mint in Australia.

Since 2015 the Royal Mint has used the fifth and likely final portrait of Queen Elizabeth (bottom right), as designed by their very own Jody Clark – the first Royal Mint employee to ever design the Queen’s portrait.

At present both the gold and silver Britannia coins feature a standing figure of the lady Britannia. This was designed by the artist and sculptor Philip Nathan and is derived from that of the Florins coin, better known as a Two Shillings.

Nathan’s coin design features Britannia looking to her left with the wind blowing her hair. In her right hand is a trident, and in her left is an olive branch clasped alongside a shield bearing the Union Flag. The artist’s signature is present at the base of the coin.

This is the original design by Philip Nathan featuring a standing figure of the lady Britannia,
complete with trident and shield.

Coins produced in this style between 2012 and 2017 were exclusively bullion coins. Unique
designs were used for proof coins, as listed below.

To view our range of 1oz silver Britannias, click here.

In this design, Britannia is riding in a two-horse chariot – a piece of imagery inspired by the Celtic
Queen, Boudicca (Boadicea). This coin was also designed by Philip Nathan.

Designed by Philip Nathan, the 2001 Britannia coin features a more squared typeface. It is inspired by
Queen Victoria’s ‘Una and The Lion’.

The reverse shows Britannia and the lion both facing to the left. The lady has her shield raised, trident
in her right hand behind her, and Nathan’s signature is beneath the lion’s mane.

This is Philip Nathan 's fourth Britannia design. The same typeface is used as the 2001 coin, but the
tessellated effect makes the coin look like a jigsaw and the waves stand out more notably.

The image is a side-facing portrait of Britannia, looking to the left of the coin while wearing a helmet.

The 2005 Britannia design features the lady Britannia sat down, with her trident and shield resting at
her sides.

This was the last variation designed by Philip Nathan.

In 2007 Christopher Le Brun became the first new designer of a Britannia coin. In his artwork, Britannia
is sat against a tree with the lion at her feet. A wreath runs around the tree and half the coin, while the
Union Flag shield sits at her side and she plays with what looks like an olive branch.

The 2008 Britannia was designed by the sculptor John Bergdahl. The design was less busy or crowded
than previous years and showed the lady Britannia stood in amidst the crashing waves; trident in one
hand, shield in the other.

A small lighthouse is visible behind her, which has led some to describe this coin as The Lighthouse
Britannia.

Artist Suzie Zamit designed the reverse of this coin, with the more notably drawn style a nod back to early
twentieth century French gold coins.

Britannia has a dour look on her face and is looking to the right of the coin, with leaves flanking the 2010
numbers.

Click here to view the 2010 one ounce Britannia gold coin.

Speaking to the Royal Mint after his coin was created, Mach said: " I worked out a design with as much
movement as I could for a small surface area; movement that would encourage people to turn the coin
and watch the light shift over the surface like I had done with half-crowns as a boy. My design acts as a
lenticular image.The flag and Britannia appear to move reflecting a contemporary Britain; a changing
Britain; a Britain which is culturally on the move but still with plenty of reasons to wave the flag.

Robert Hunt designed the first of several Proof Only coins for Royal Mint collection purposes, coinciding
with the launch of the new, higher purity coins.

The design sees Britannia sat on a chair with a Greek helmet on and a different style of trident. The Union
Flag shield has disappeared, but instead an owl – a symbol of wisdom – sits on Britannia’s knee.

The next Proof Only coin design came from the Royal Mint’s own Jody Clark, who in less than a year would
be famed for becoming the first Mint employee to have their portrait of the Queen used for the obverse of
British coins.

In Clark’s design, Britannia is posing almost like a model, still wearing the Greek helmet but with a slightly
more traditional trident. A lion rests at her feet and a net-effect globe resides in the background giving a
geometric, modern feel.

The painter and sculptor Antony Dufort produced 2015’s proof design. His work includes the sculpture of
Margaret Thatcher that currently resides in the Members’ Lobby of the Houses of Parliament.

This Britannia continues to keep Britannia wearing the plumed helmet but it’s a much closer portrait look
at the lady once again. The shield has returned to her left side, while the trident rests on her right shoulder.

Like the 2008 Brit, a small lighthouse is visible in the background, though in this case it sits on the horizon
while a ship sails inland.

Six years after her last design, Suzie Zamit returned with another artistic piece of coin engraving. The Warrior
Britannia again has Zamit’s unique style of lines, giving great detail to the coins – especially on the Lion’s mane
– and features a more traditional Britannia stood poised with shield and trident.

British artist Louis Tamlyn produced this anniversary edition coin which is a clever mix of Britannia coming
out of the United Kingdom but results in a very busy coin design.

The plumed helmet, trident, and shield all feature again, as does a subtle hint of the Union Jack to the right
of the coin – with LWT engraved in the middle to indicate Tamlyn’s work.

2017 was an anniversary year for Sovereigns and Britannias. On the Sovereign coins a small shield mark
resided to the left of the year. For the bullion Britannias, this mark was a small trident, just before the letter
B for Britannia.

Both the gold and silver coins feature this mark, despite it being the anniversary for the gold coins. The
background also features the guilloche pattern in the background behind Britannia – a new design feature to
discourage counterfeiting.

Following the 2017 anniversary test, the new Guilloche effect was used for all 2018 Britannia coins. It was
preceded by the Unicorn and the Bull of Clarence, coins part of the Queen’s Beast series, but this was by a
matter of weeks.

2018 was also the year of release for the Platinum Britannia coin, limited to a mintage of 5000. This coin also
features the guilloche pattern and is a 1oz coin.

To commemorate the Royal Mint’s move into the Asian bullion market a new bordered design of the Britannia
was commissioned.

The pattern was inspired by the Chinese rooms at Buckingham Palace and the Royal Pavilion in Brighton.

2018 - The Corinthian Britannia - PROOF ONLY

The 2018 Proof Britannia coin was designed by pastiche artist David Lawrence. Best known for his surrealist
work, Lawrence was commissioned by the Royal Mint to produce a new proof-only take on the lady Britannia.

His design is a more intimate portrait; side on like a monarch, Britannia is depicted with flowing hair and a floral
wreath emanating from her Corinthian helmet. Eagle-eyed customers may notice that the flowers include an
English rose, Welsh daffodil, Irish clover and Scottish thistle as a subtle nod to the union of the United Kingdom.

Following the popular demand of the 2018 Proof Britannia coins, the Royal Mint once again commissioned
surrealist David Lawrence to reimagine Britannia for their newest proof coins.

The design on this version carries more authority in Britannia's pose; stood by a lion she is once again wielding
the trident and shield which are so often depicted as part of her legend.

Following the success of last year's limited mintage of Britannia coins with an oriental-style border, the Royal Mint has issued another set of gold and silver 1oz bullion coins for investors and collectors alike.

For help ordering any of our Britannia coins, or for more information on Britannias, please call our customer support team on 1-888-334-1630 or email us at support@bullionbypost.com.