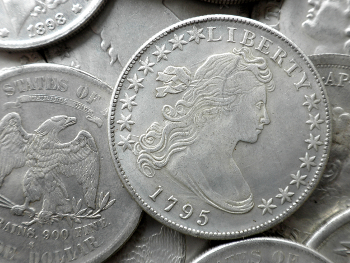 Collecting rare coins is a popular hobby and method of investment. The study and collection of coins and other forms of currency is known as numismatics and the demand from collectors for rare coins can often lead to the inflation of their prices.

In theory, the worth of a bullion coin is objective as it is determined by the price of its precious metal content. A gold bullion investor or dealer will therefore value a coin according to its weight and the gold spot price. A numismatist, however, may value a certain coin higher than one of the same weight and material due to factors such as its grade, condition and rarity.

An example of this is the Gold Double Eagle. This is an American bullion coin with a face value of $20, containing approximately 30g of fine gold. The coin was generally minted on a large scale from 1849 until it was discontinued in 1933 and many of the coins are available for small premiums over spot price. However, the fact that production of the coin ceased so long ago means that availability of the double eagle is lower than it once was and certain issues are now incredibly rare. 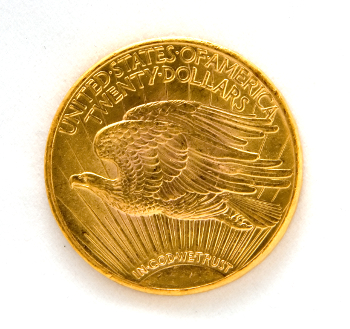 The 1933 Double Eagle, for example, was ordered to be melted down before it was ever officially circulated. Only a few of these coins survived, making it one of the rarest coins in history and would now cost millions of pound to buy, despite only weighing 30g of gold. The most expensive coin of all time is a 1794 US Silver Dollar, one of the first ever minted, that was bought in an action for $10 million, despite having a face value of one dollar and containing less than 24g of pure silver.

View our range of Double Eagles.

Most bullion coins will have certain years or designs that are rarer than others and numismatists around the world will often be prepared to pay high premiums in order to add them to their collection. Popular coins such as the Krugerrand are minted regularly and are generally not difficult to find, but many collectors would pay an inflated price for a specific year.

View our range of rare gold coins from around the world.

This phenomenon does not only apply to bullion coins. There are several examples of rare circulating UK currency coins, with specific designs or errors that collectors will pay high prices to be able to own. In 2012 a series of 50p coins were circulated in honour of the Olympics, featuring images of different sports on the reverse. One of the designs- the picture of a swimmer- was changed soon after production to make the athlete’s face more visible and a collector once paid as much as £820 for this coin that would only be worth 50p in a shop. Although this is unusual, with the coin usually selling for a few pounds, this example highlights to what extent the value of a rare coin can be inflated. As time moves on and coins become lost or deteriorate in condition, a rare coin such as this could appreciate in value, making it a potentially lucrative investment.

However, while the potential of rare coins is arguably enormous, there is also an increased element of risk involved in viewing rare coins as in investment. Certain coins do indeed sell for huge sums but this value is ultimately only determined by the buyer and the amount they are willing to pay. The value attached to rare coins is largely a sentimental one and while there are perhaps some exceptions- it may not always be easy or possible to find a buyer who is willing to match your valuation of your coin. For many people, coin collecting is a hobby and therefore a luxury, meaning that in difficult times people may not be willing to trade as much for a rare coin, damaging the potential return on your investment.

The value of a rare gold coin is at least protected by its precious metal content but the same is still true to an extent. A rare Double Eagle, for example, will always be worth at least the value of 30g of fine gold but, if an investor who paid an inflated price due to its rarity were forced to sell the coin for its bullion price, this would represent a potentially enormous loss on their investment.