While the use of gold and silver as stores of wealth can be traced back to ancient civilisations, investment in platinum bullion is a much newer phenomenon. However, since the 18th Century, investment demand for platinum bars and coins has grown exponentially. The past 30 years in particular has seen interest in platinum investments grow, with this alternative metal used as a way to further diversify a portfolio. 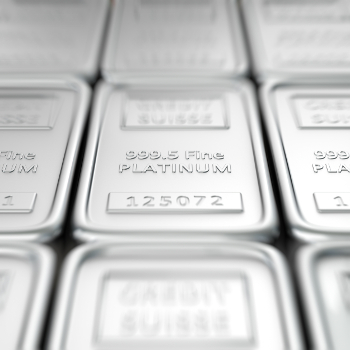 At BullionByPost we believe physical bullion is the best way to make platinum investments. This allows you to have total control over your investment, with a physical item you can buy, store, and sell as you please.


Is platinum a good investment?

Platinum is much scarcer than either gold or silver, with about 15 - 20 times less of the metal in the ground, and has therefore always tended to be the most expensive of the precious metals. To this day, platinum is often considered the highest award, above gold even.

In the last few years, however, this has not been the case. A flagging global economy, and a transition to palladium for industrial use has caused the platinum price to fall behind gold, costing around half as much as gold at the time of writing.

Platinum is still seen as a good investment by many however. It's scarcity, and industrial uses haven't gone away, and the high price of palladium has led to speculation that platinum may once more become the industrial metal of choice. If this does happen then platinum would likely see very large price gains, as demand would far outstrip supply. It is often this potential price rally used as an argument for platinum as an investment.


Investing in platinum or gold

Platinum has a tendency to perform better than gold during extended periods of economic growth and be outperformed by the yellow metal during periods of economic instability, when confidence in the financial system is low. The industrial use of platinum means it relies on production to be high, but with more and more electronics being produced every year, platinum can now be found in many of the devices we use every day.

This is a common phenomenon that differentiates the two metals and is mainly due to two influencing factors:


Although platinum does attract some safe-haven demand in times of economic struggle, this is somewhat counteracted by the drop in industrial demand. As such, its value is unlikely to increase to the same extent as gold, as can be seen by the gold: platinum ratio.

Based on the annual mine production of platinum, it is estimated that there is 15 - 20 times less platinum in the earth’s core than there is gold, yet it has a much larger range of uses. This makes platinum more volatile than gold, as its partial dependence on economic growth makes it prone to larger fluctuations. While this may be considered a deterrent by the more risk-averse investor, it can also be an excellent opportunity.

As more and more is discovered about the numerous applications of platinum, and the metal’s importance in our daily lives grows, it is likely that demand for platinum will increase, which could push its prices even higher.