How Much is a Silver Dollar Worth? 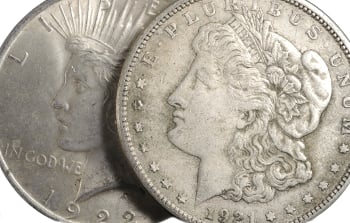 Between 1794 and 1935, the US Dollar coin was minted in silver. Although this coin has a nominal face value of one dollar, a silver dollar is worth much more than that due to the value of its pure silver content. Like all precious metal bullion products, the price of a silver coin is not fixed and depends on a number of variables including its silver content and the spot price for silver, which also depends on various factors such as demand and confidence in the wider economy.

To calculate the value of a silver dollar, you multiply its fine silver content by the current spot price for silver. A silver dollar contains 0.7735 troy ounces of pure silver, so at the time of writing a silver Dollar would be worth over $17 on metal value alone.

However, as a famous coin that attracts significant interest from coin collectors, some Dollars will sell for much more than others. Silver Dollars are what is known as ‘semi-numismatic’ coins. This means that they attract significant interest from coin collectors as well as investors in silver bullion, and their value can therefore be influenced by certain factors such as the scarcity of a certain design, or the year, or mint in which they were issued. This means that certain particularly rare coins will be likely to cost much more than it is really worth in terms of intrinsic, material value based on the coin’s fine silver content.

Investing in silver coins at a higher premium is a slightly riskier method for bullion investors, as they will only be able to sell them for a similar, or higher, premium to another collector who appreciates the coin’s numismatic qualities. However, the potential reward of this risk is that, as a specific coin becomes more difficult to find throughout time, its collector’s value could soar. To put this into perspective, the most expensive coin of all time is actually a silver Dollar, selling for $10 million at an auction in 2013!

The modern 1oz Silver Eagle coin produced by the US Mint also has a nominal face value of one Dollar. This should not be confused with the older Dollar coin, as this was - for a time - circulated currency. The modern silver Dollar coin contains a full troy ounce of silver, and is valued mainly on its metal value. 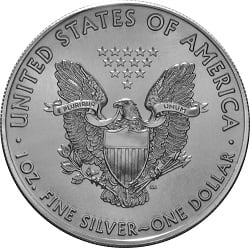